Daruma Tech was approached by the Museum of Discovery and Science in Fort Lauderdale with the task of creating a way for students to showcase their internship projects. This solution needed to be integrated with the MODS existing mobile application as well as provide a seamless UI/UX experience for the student and app user.

The Museum of Discovery and Science is a museum located in Fort Lauderdale, Florida. It is known as one of the largest museums of its kind in Florida and has the most visitors of any museum in the state. Their mission is connecting people to inspiring science.

The App-titude Internship Program at MODS is one of the many programs offered by The Salah Foundation STEM Center for Education and Career Development and is underwritten by United Way of Broward County. This two-year internship exposes high school students to careers in computer science, engineering and mobile app development while being introduced to coding and other technological aspects.

Daruma Tech understood one of the biggest challenges of this project: expanding the container app every year so that new App-titude student projects could be showcased. The secondary issue was finding a way that the various projects, which include puzzles, quizzes, videos and Augmented Reality based scavenger hunts could be incorporated in a way that they seamlessly fit into the existing app and it’s features.

For this project, Daruma Tech oversaw the collaboration of over 120 students along with a coalition of academic, commercial, and non-profit partners, tested the student projects, then organized and incorporated them into a single container app, which was made available for free download on iTunes and Google Play.

Daruma Tech used the information provided by MODS to create a container app, make sure that all the AR assets worked properly and to place the app in the Apple Store and the Google Play store accordingly. We also created the AR targets for the students for a secondary project – augmented reality scavenger hunts. 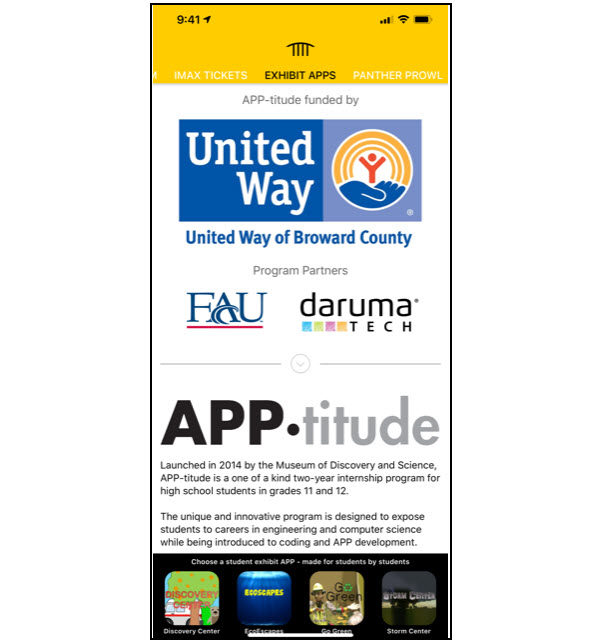 Because of the success of the container app, Daruma Tech has been asked to give yearly presentations to the App-Titude students to encourage learning, growth and success. The app is updated yearly as new students join the program. The mobile app is available for both Apple and Android platforms. Download to your phone or tablet from the App Store and Google Play by searching for “Museum of Discovery & Science”.

BOCA RATON, FLA—Even as the COVID-19 pandemic has forced bars and restaurants to close their dining rooms and taprooms, independent craft breweries are continuing to engage customers, exploring safe and novel ways to serve their communities, and cultivating new fans, thanks to Brewers Marketing’s dedicated mobile app and marketing [...]

Daruma Tech was approached by the Museum of Discovery and Science in Fort Lauderdale with the task of creating a way for students to showcase their internship projects. This solution needed to be integrated with the MODS existing mobile application as well as provide a seamless UI/UX experience for [...]

BOCA RATON, FLA—Daruma MSP, Daruma Tech’s IT services division in Boca Raton, has signed a contract with BlueDog Group, a major provider of high-end audiovisual systems design, installation, and project management, to manage its over 40 cloud-based servers. This contract is one of Daruma MSP’s largest yet and reflects [...]

Tell Us About Your Project